France Retail: retailers’ confidence sank in the first quarter of 2022

Despite the Eurostat TCF (Textile, Clothing and Footwear) suggesting the return of retail to normalcy, there are red signs undermining not only consumers’ confidence, but also the retailers’ one, who before had displayed some insensitivity towards risks. Surging energy prices, inflationary pressure and the war in Ukraine are overshadowing any boost from an easing of COVID-19 restrictions. The subsequent increase in costs does make us wonder why TCF retail is not in the red yet

Footwear retail: back to normal?

According to the Banque de France Index (BdF), footwear retail sales reflected the impact of the Omicron-variant wave and the subsequent reinstalment of restrictions in late 2021. But, with the progressive lifting of such restrictions since mid-February, the BdF Index returned to pre-pandemic scores in March, less than 20 percentage points below the 2010 baseline. In fact, footwear sales were even one of the top categories, up by more than 10% year-on-year. 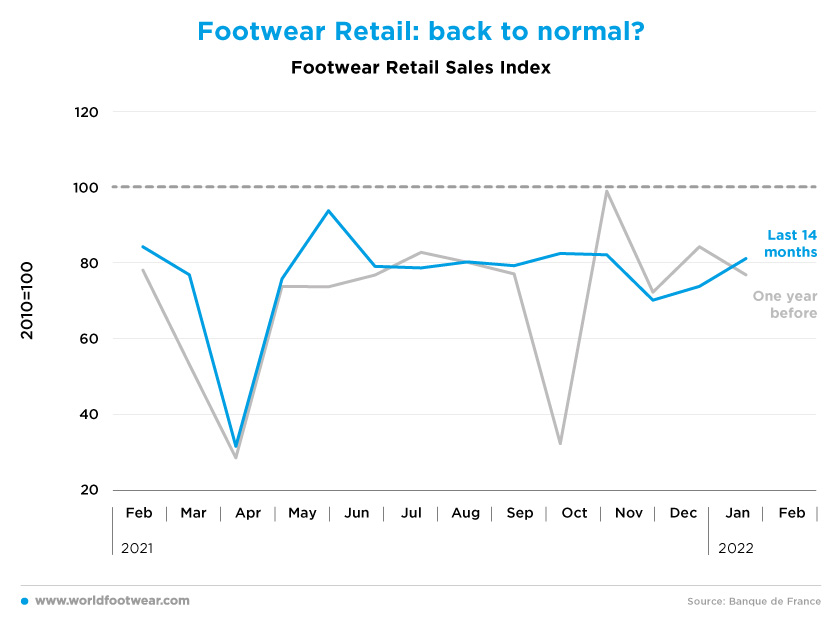 The Eurostat TCF (Textile, Clothing and Footwear) indicator also seems to corroborate the retail’s return to normalcy, almost reaching the more significant 2015 baseline (-3 percentage points).
However, Procos (the Federation for the promotion of specialized trade) stated that in the first quarter of 2022, sales were “down in stores (- 5.5%) and combined stores, plus web total activity” was still down (by 1.8%), with -14% in footwear, warning that “price increases that impact purchasing power, a climate of concern and uncertainty generated by the war in Ukraine and the presidential election -  everything encourages French consumers to be very cautious or to accept some deprivations, as well as postponing certain purchasing decisions”. (www.procos.org, April 2022)

In the first quarter of 2021, the Footwear Consumer Price Index (by Eurostat) reacted promptly to the health dynamics. At first, it retreated, but quickly resumed in March with inflationary pressures pushing it up the same way it did in the last months of 2021. Part of the increase in footwear retail in March is the result of such a price effect (3 ½ percentage points up in the 2015 price baseline). However, if cost pressures cannot be subdued, retail might end up in the red sooner rather than later. 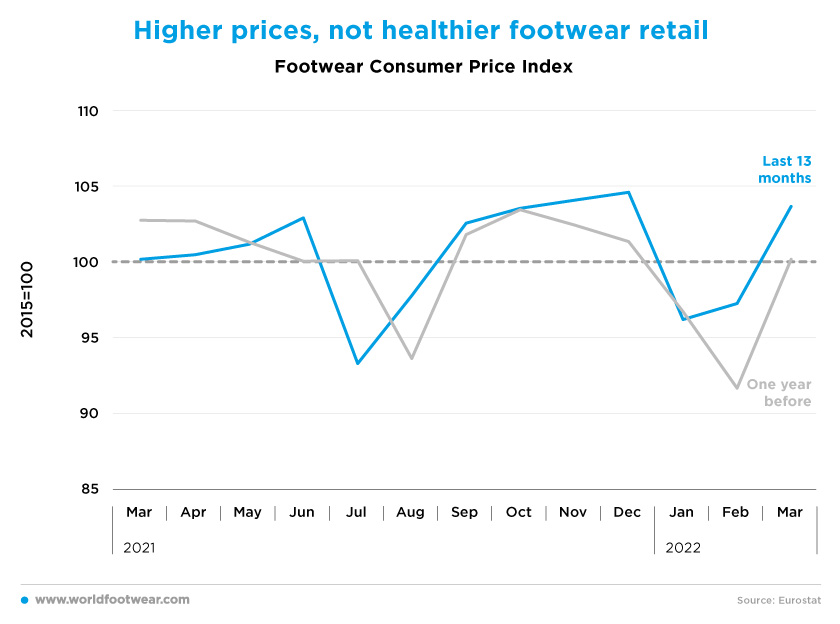 Retailers and consumers aligned on pessimism…

In the previous World Footwear Retail Flash for France, we observed a clear downward trend of consumers’ confidence in the second half of 2021, not followed by retailers. Now, the situation has changed: the worsening of the pessimistic atmosphere is evident and deep on both sides. 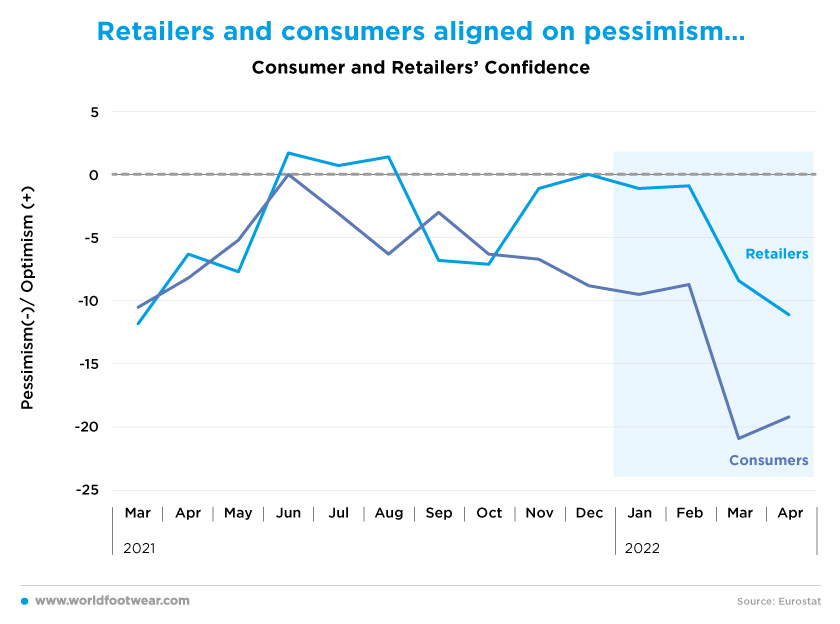 In April (as well as in March), the Eurostat consumer survey revealed that consumer pessimism beat the worst scores registered during the pandemic, with a balance of minus 19.2 percentage points between extreme opinions. According to Reuters (on the 29th of April), “consumer confidence waned amid concerns over surging energy prices and the war in Ukraine, eclipsing any boost from an easing of COVID-19 restrictions”.

… but consumers in free fall

At the same time, INSEE (Institut National de la Statistique et des Études Économiques) reported that inflation “soared from record to record in recent months, rising unexpectedly in April to touch a new high of 5.4%”.
“This increase impacts all households, but also retailers, who see their fixed costs jump, from rent to raw materials, from energy to suppliers”. According to LSA Conso, a media specialist in the distribution and mass consumption sector, “more than 60% of stores could increase the prices of their products this year” (fashionunited.fr, March 2022).
Taken altogether, the point is not when TCF Retail Sales will be in the red, but why they are not there yet.

Online: from a lifebelt to a new life for retail

In the absence of a specific TCF (or Footwear alone) Online Retail Sales Index in France, the WF Retail Flash has been using the overall Monthly Retail Sales Index via the internet as a proxy, considering the substantial weight of TCF in the overall index.
However, as seen before, while the TCF physical retail has been quite sensitive to the pandemic waves, immediately as of March 2020, the correlation with the overall retail via the internet was much less straightforward and not visible at all before May the same year (about 50 percentage points above the 2015 baseline). 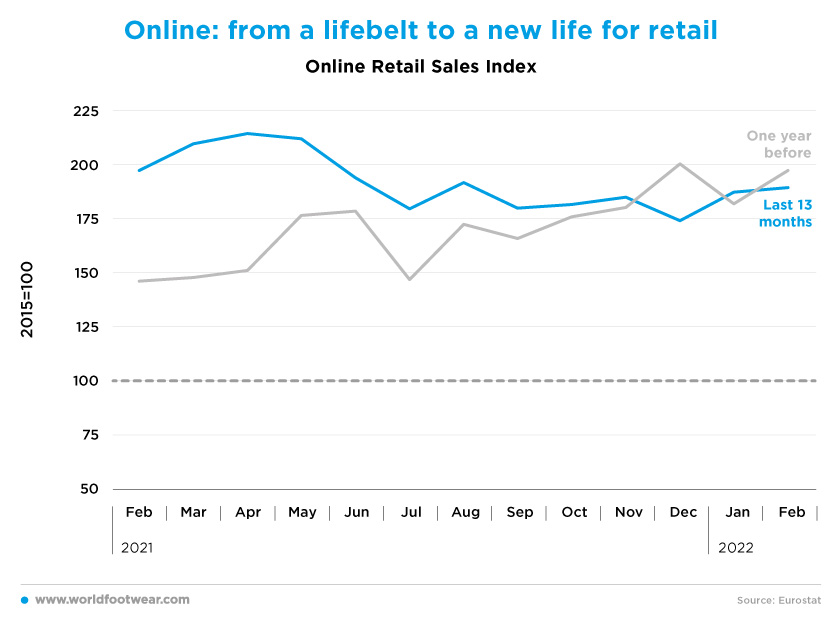 In February 2021, just before the overall TCF index had fully returned to its normal path, the online retail index was about 40 percentage points ahead of the pre-pandemic score (at the 190-percentage points bar). Moreover, as reported before, combined stores plus web total activity was down by 1.8% in the first quarter, against  (down by) 5.5% for the physical stores alone, which strongly suggests a net share gain in favour of online retail.
Back to News
Use left/right arrows to navigate the slideshow or swipe left/right if using a mobile device